Charles Hamilton returned to England from his Grand Tour with a collection of statues and paintings and acquired the land at Painshill, Cobham in 1738. 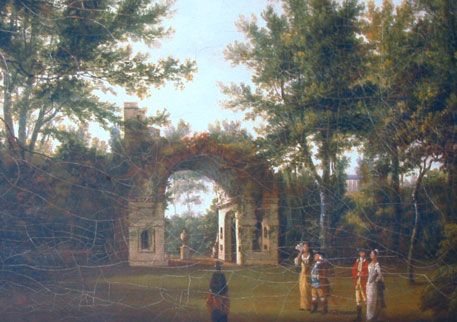 He began gardening when there was a change in ideas and philosophy, away from formal, architectural gardens (such as Versailles or the Hampton Court Privy Garden) moving towards a more informal, pictorial garden. Called the ‘natural style’ or the English Landscape Garden, it became a fashion which caught on and spread across Europe to France, Germany, Italy, Russia and even across the Atlantic to America.

Combining his passion for plants and artistic vision, Hamilton infused his memories, thoughts and ideas of Europe and his Grand Tours creating the Pleasure Grounds at Painshill. The area around the serpentine lake is like a harmonious scene painted by Claude Lorrain; while the wilder, western woods are more like a picture of Salvator Rosa.

The garden had a clear circuit route and the visitor was intended to become involved emotionally – to experience a variety of moods during the journey, as Hamilton himself would have done on his Grand Tour.

Hamilton had seen many vineyards in Europe and planted vines at Painshill to make wine, which sold at 7s 6d a bottle. The outcome varied, his white wine deceived the French Ambassador into thinking it was champagne, although his red wine was described as tasting like vinegar. A specialist vine grower, a French Huguenot, David Geneste was employed for a number of years.

The evergreen amphitheatre has a large oval lawn which is a similar shape to a Renaissance Roman Hippodrome. On a plinth was placed a copy of the Sabine Group by Giambologna made of lead by John Cheere of London. The setting of the vineyard, a terrace, a copy of the Italian statue and the evergreen planting would have reminded Hamilton of his Italian journey.

The first building on the circuit is the Gothic Temple, inspired by the increasing interest in British antiquity and Gothic architecture, but Hamilton would also have seen Gothic buildings in Europe, including the exquisite Gothic buildings in Venice.

The Crystal Grotto at Painshill is a magical, naturalistic cave with shimmering, bubbling water, rough rock and stalactites covered in sparkling crystals. The grottoes Hamilton saw in European gardens had water, rough rocks but were more architectural as structures. He may have seen some of the natural caves along the Roman coastline of Italy.

From Grotto Island the mood changed, the wondrous vision of the grotto fades to an atmosphere of melancholy. Dark trees line the path to evoke a feeling of poignant sadness, reminding visitors of the swift span of life and transience of material things.

The Painshill Mausoleum was similar, though much smaller than the Arch of Constantine which Hamilton saw in Rome. This ruined Roman arch was the only place in the garden that there were plaques, inscriptions and urns – possibly brought back from his Grand Tour.

At Painshill, like the Machine of Marly in Versailles, a waterwheel was needed to lift water from the river to provide water which allowed a 14 acre lake to be created. The wooden waterwheel, designed by Charles Hamilton, was 35m in diameter. The raised water travelled underground to the rustic cascade, where it then trickled down into the lake.

The Temple of Bacchus

Hamilton chose classical architecture for his Temple of Bacchus to house his precious statue of Bacchus brought secretly from Italy. The niches of the Temple contained copies of statues Hamilton had seen in Rome, Apollo Belvedere, Venus de Medici, Mercury and Venus Marina.

The Turkish Tent was a most foreign feature with which to end the tour. Although Hamilton did not travel to Turkey, he would have seen examples of Ottoman culture across Europe. A decorated Tent was considered both war-like and cultured. There were plush armchairs placed inside the Tent for weary visitors to rest and enjoy the view across the gardens, to reflect and relive their own personal tour.

Many young men of the age of Charles Hamilton completed their education on the Grand Tour. But it was not just about seeing ancient ruins and classical architecture, they also developed an eye for beauty – a way of seeing – developing an artists eye. It led to an appreciation and understanding of the beauty of the landscape, through views, vistas and the play of sunlight and shadow, which underlie many of the English Landscape Gardens, making them works of art.